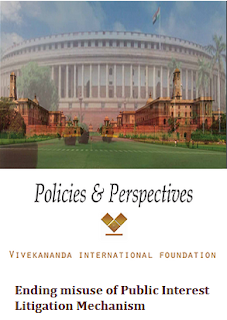 The Vivekananda International Foundation (VIF) organized a seminar titled "China's Internal Dynamics, Relations with India & Cyber Security", along with the Prospect Foundation from Taiwan on 01 November 2017. Dr. Arvind Gupta, Director VIF, and Dr. Tan-Sun Chen, Chairman, Prospect Foundation, delivered the opening remarks. Dr. I-Chung Lai, Dr. Yi-Bin Lu, and Mr. Fan Peng participated from the Prospect Foundations whereas Mr. Jayadeva Ranade, Amb. TCA Rangachari, Dr. Sujit Dutta and Lt Gen Davinder Kumar represented the Indian side. The Taiwanese Representative in India, Chung- Kwang Tien, Mr. Jason Huang, Mr. Chihlung Sheng, and Mr. Oliver Harn also participated. Many senior members of the strategic community, scholars from think tanks and universities attended the seminar.
The discussion was divided into three sessions: One, ‘Evaluation of 19th Party Congress; two, ‘China’s Rising Cyber Power’; and three, ‘A Case for India-Taiwan Strategic Cooperation’. Opinions expressed by the Taiwanese delegation in each Session are enumerated in the succeeding paragraphs.
Session 1 : The Chinese Communist Party (CCP) General Secretary Xi Jinping, who holds fourteen formal positions (more than any other CCP leader so far) has emerged stronger from the 19th Party Congress. The biggest takeaway from the 19th Party Congress was that there are no apparent successors, leading to strong speculation that Xi could seek a third term after concentrating his power. The Party Congress emphasised that the People’s Liberation Army should focus on realising ‘Chinese Dream’ for which it should develop “a new military strategy under the new situation”. China will complete the modernisation of its armed forces by 2035 and achieve a world-class military by 2050 that can fight and win wars across all theatres.
Session 2: China has leveraged cyber-enable theft of intellectual property to create its critical mass. Its ‘Internet Plus’ strategy will further help in building its cyber space capacity. However, China is unlikely to be a dominant cyber power as it has inward looking focus. Democratic countries are more deliberate and hence they can build better cyber power in the long run.
Session 3: India and Taiwan have democratic governments and can identify cyber security as a strategic enabler of their unofficial relations. Both have the potential to pool together critical mass capability for strategic cooperation in cyber security.